After a string of success, writer and actress Roseanne Barr may have just had a big misstep.

ABC has announced that “Roseanne,” the reboot of the 90s-era hit sitcom starring Roseanne Barr, has been canceled.

ABC Entertainment president Channing Dungey: ‘Roseanne’s Twitter statement is abhorrent, repugnant and inconsistent with our values, and we have decided to cancel her show’ https://t.co/xt0KAdFOKf #Roseanne pic.twitter.com/MfjSMabR8G

This is extremely unfortunate. “Roseanne” ended its first season with record ratings. (RELATED: After the Season Finale, Roseanne’s Ratings Dominate All Other Television Shows). But now it looks like all of that is over now after Roseanne sent out a series of misinformed tweets.

In the first, the outspoken Trump advocate went after former Obama White House advisor Valerie Jarrett in a mean-spirited tweet. The tweet has since been deleted, but you can see it below:

There’s no mistaking it: that was a racist joke. It was cruel and unnecessary. Roseanne later defended herself by pointing out that Islam isn’t a race, even though I think most people took issue with her comparing Valerie Jarrett to an ape.

Roseanne has since apologized:

I apologize to Valerie Jarrett and to all Americans. I am truly sorry for making a bad joke about her politics and her looks. I should have known better. Forgive me-my joke was in bad taste.

The only problem is that it gets worse. Around the same time, Roseanne accused Chelsea Clinton of being a nephew of George Soros: 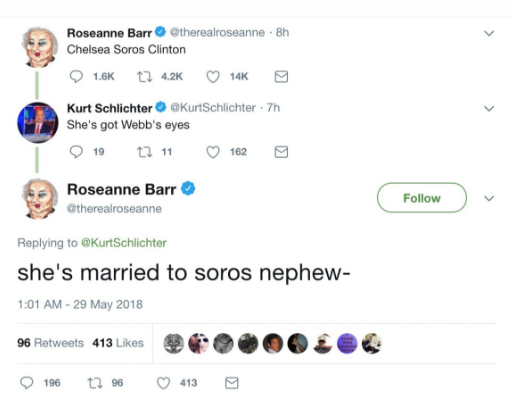 Chelsea Clinton has since responded to Roseanne, explaining that she isn’t related to the Soros family:

Good morning Roseanne – my given middle name is Victoria. I imagine George Soros’s nephews are lovely people. I’m just not married to one. I am grateful for the important work @OpenSociety does in the world. Have a great day! https://t.co/mXokiTEwN7

Roseanne also apologized to Clinton. But it may have been too late. The criticism has been so bad that Roseanne was forced off Twitter:

We knew the fallout was going to be bad when Wanda Sykes, a fellow comedian and consulting producer, announced that she will no longer work on the show:

I will not be returning to @RoseanneOnABC.

This is bad. Roseanne is in a bad spot. After such a successful season, she shouldn’t squander away her gift for entertaining people on cheap Twitter jokes.

And now she’s going to pay the price with her show being canceled.

Do you agree with ABC’s decision? Tell us your thoughts below!