Michael Avenatti, the brash one-time anti-Trump darling of CNN, was sentenced to 14 years in prison for bilking clients out of millions of dollars.

In addition to the latest prison sentence, Avenatti is being forced to pay his victims $7 million in restitution.

“I am deeply remorseful and contrite,” the disgraced lawyer said prior to his sentencing.

“There is no doubt that all of them deserve much better, and I hope that someday they will accept my apologies and find it in their heart to forgive me.”

Quite the different tune from his former braggadocio!

Michael Avenatti, the attorney who represented Stormy Daniels in litigation against Donald Trump, was sentenced to 14 years in prison after admitting to cheating four other clients, including a paraplegic, out of millions of dollars https://t.co/4h1F3pYIYF pic.twitter.com/9bZF3hXJxF

RELATED: Michael Avenatti Cries Before Being Sentenced To Two And A Half Years In Prison

Michael Avenatti rose to prominence representing Daniels in lawsuits against former President Donald Trump, which in retrospect seems to be the only qualification for having been taken seriously by the media.

He was their dream foil to Trump.

His cockiness made him a frequent guest on left-wing media outlets such as CNN and MSNBC, and his prominent on-air presence led Avenatti to flirt with his own White House run.

Fake News personalities even presented him a legitimate contender.

The latest news cycles, however, have not been very kind to him.

Prior to his sentencing for previous crimes this past July, reporters observed that the lawyer was seen crying in court before delivering a remorseful speech.

“Everyone wants to ride in a limo with you, but very few are willing to sit next to you on the bus. Even fewer, your honor, are willing to take your calls from prison,” lamented a sad Avenatti.

Prior to that, his bid to be sentenced remotely was denied by a judge, prompting Daniels to taunt him saying, “See ya there, bitch!”

See ya there, bitch!… except I’m flying in first class. Buwahaha https://t.co/mg5ybm3xGD

The Media Adored Him

Aside from being hailed a hero by the resistance for potentially taking down Trump, Avenatti also meddled in other political affairs, famously introducing a third alleged victim during the eventual confirmation of Supreme Court Justice Brett Kavanaugh.

Julie Swetnick made claims that Kavanaugh was present when women were drugged and gang-raped at house parties. But she couldn’t get her story straight from the get-go, and the charade quickly fell apart.

For his efforts, Avenatti and his client were referred for a criminal investigation for allegedly providing false statements, obstructing congressional investigations, and conspiracy.

Just another fraud perpetrated by the bottom-feeding lawyer.

You know what that means 🎥:

Avenatti was an almost-daily guest on mainstream media outlets as they viewed him as the best hope to match Trump’s bravado during his term as President.

He was even spotted living it up at a “soirée” with anchors and contributors at CNN. 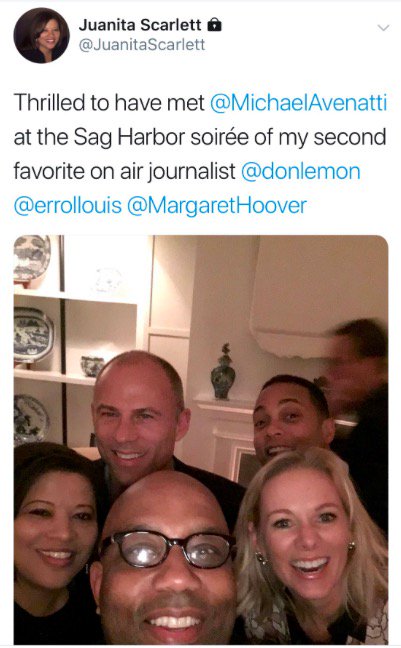 Liberal comedian Bill Maher introduced him as Trump’s “worst nightmare” and said he was a “folk hero” to people who believed he could get Trump impeached or, preferably in their eyes, indicted.

Since Michael Avenatti has been sentenced to 14 more years in jail, I am once again obligated to remind the internet of the time Ana Navarro compared him to the Holy Spirit.
pic.twitter.com/y63JoXlW5Y

Too bad, CNN. You’ll have to find a new hero.

They got one thing right. He is a beast & the pro-claimers of the Beast, nailed their own hides to his wall. Looks good on them…

So CNN said he was a contender for the Presidency. Look where CNN is and look where Avenatti is. Both have taken a hike down shit street.

Betcha half the talking heads at CNN are heartbroken and whining about a miscarriage of justice.

I originally posted this more than a year ago with reference to another article, but in honor of the occasion, here it is again:
A tally I saw just the other day was that the combined efforts of what we can laughingly call media presented Avenatti to news consumers 147 times in a one week period in 2019, an average of 21 times a day, nearly once an hour, round the clock, for a week. Stelter, Reid and Wallace all richly deserve opprobrium, but the article missed my personal favorite, the freshly rehabilitated Jeffrey Toobin. A Harvard trained lawyer, scion of television news broadcasters, raised in sophisticated Manhattan, and paid handsomely by CNN as a “legal analyst” Toobin admitted that Avenatti “snookered” him. A delicate way of saying that the highly educated, highly compensated, insightful Toobin failed to spot what every waitress, uniformed policeman, bouncer, and cab driver could see with one eye closed when they looked at Avenatti: a shyster in a shiny suit, on the make.

And you can bet the msm reta#ds won’t be questioning ( airing ) their bias that was presented and flaunted for mass consumption.
#FSatan ( With all due respect )

Michael Avenatti is exactly where 75% of all DemoKKKrat politicians belong!

it’s a start
now keep going many more to go

Another one of the lamestreet medias’ darlings to get a comeuppance. In his case, too lenient.