Democrats would be at risk of losing five Senate seats if the midterm elections were held today according to new Axios/SurveyMonkey polls.

If the elections were held today, Democrats would be unseated in Montana, West Virginia, Missouri, Indiana, and North Dakota – and in 4 of the 5 states, it’s by an unnamed “generic Republican.” 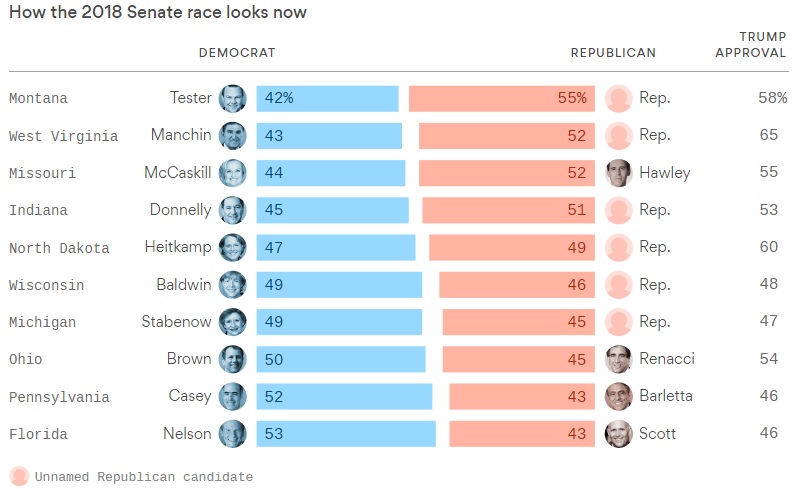 The most vulnerable senators are Joe Manchin of West Virginia, Jon Tester in Montana, and Claire McCaskill in Missouri. I can’t say any of them would be missed.

As the writers at Axois note, the polls as of today are particularly problematic for Democrats, because they’re “defending 10 Senate seats in states Trump won in 2016. In six of those states Trump’s approval is higher than 50% (compared to 43% nationally). These numbers underscore how hard it will be for Democrats to pick up the two seats needed to win the majority despite Trump’s troubles.”

A Politico/Morning Consult poll last month found that, for what seems like the first time in ages, a generic Republican is polling above a generic Democrat. According to the poll, 39 percent of registered voters say they would support the Republican candidate for Congress in their district during the midterms, while 38 percent would back the Democrat candidate. The remaining 23 percent were undecided.

Trump’s approval has been trending upwards too, but it’s not the most important variable in how Republicans will perform during the midterms. On the issues, congressional Republicans also have a 9-point advantage on handling the economy, a 6-point lead on dealing with immigration, and a 19-point lead on handling national security.

The only single policy issue where people favor democrats is on health care, but even their lead there has fallen to 4 points.

Will Democrats get creamed in the upcoming fall elections? Tell us your thoughts below!