Former Hillary Clinton adviser Philippe Reines on Saturday posted the address and contact information of a Virginia bookstore on Twitter after the storeowner called the police on a customer who insisted on harassing former White House chief strategist Steve Bannon.

Richmond, Virginia bookstore owner Nick Cooke called the police on Saturday after a woman verbally accosted Bannon and then refused to leave the store, Cooke said. The woman reportedly called Bannon a “piece of trash”before Cooke asked her to leave.

“Steve Bannon was simply standing, looking at books, minding his own business. I asked her to leave, and she wouldn’t. And I said, ‘I’m going to call the police if you don’t,’ and I went to call the police and she left. And that’s the end of the story.” Cooke toldthe Richmond Dispatch. 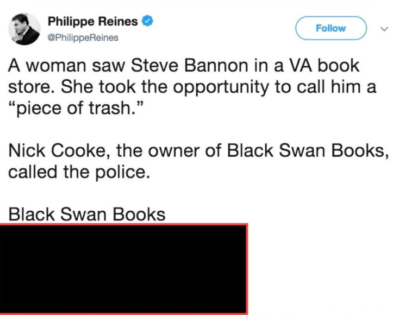 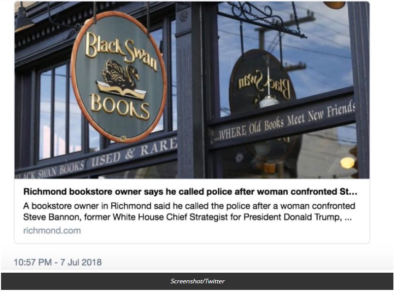 Reines defended his decision to public the store’s contact information in an email to The Daily Caller News Foundation.

“You have some very fine people on both sides. They may want to contact the store as many did after Sarah Slanders™️ was asked by the owner to leave the Red Hen restaurant. For convenience I copied & pasted the store’s ‘Contact Us’ page,” Reines said.

“I’m providing a service to the public by providing the contact information the bookstore posted on their website – presumably with the hope of being contacted,” Reines wrote on Twitter on Sunday. “I presented facts [without] encouraging any behavior.” (RELATED: Former Hillary Clinton Staffer Launches Bizarre Sex Attack On Don Jr.)