Pelosi made the outrageous claim in a discussion with reporters about the massive $3.5 trillion reconciliation package that Democrats are struggling to get support for.

“It’s not about a dollar amount,” she told reporters. “The dollar amount, as the president said, is zero. This bill will be paid for.”

Pelosi was drawing on President Biden, who also made the ludicrous claim.

“My Build Back Better Agenda costs zero dollars,” Biden tweeted over the weekend, claiming he would use tax enforcement and eliminate tax breaks for ‘the wealthy’ to pay for his social programs.

“And it adds zero dollars to the national debt,” he reiterated.

Pelosi punctuated her claim that the $3.5 trillion spending bill will cost zero dollars by making a gesture indicating ‘zero’ with her right hand.

Or, as the media likes to call it, she made a symbol associated with white supremacy. 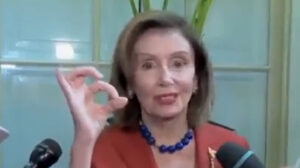 Regardless, the claim is – to borrow a Biden phrase – a bunch of malarkey.

The notion that something “costs zero” just because it’s “paid for” is self-evident hokum. If you empty out your savings account to buy a new roof, the cost isn’t “zero” merely because you didn’t put it on your credit card. The cost is the cost.

But even using the Newspeak that something only has a “cost” if it’s added to the debt, that’s malarkey, too.

Joe Concha, a columnist at The Hill, says the absurd lie is “insulting the intelligence of sober, sane Americans,” and points out that the Committee for a Responsible Federal Budget (CRFB) reports that the $3.5 trillion bill would call for the U.S. government to borrow $1 trillion.

“It also projects that approximately $3 trillion would be added to the national debt over the next decade,” he writes.

Most astounding? The CRFB actually estimates the cost of the bill to be trillions more. $5.5 trillion to be more precise, which is exponentially more expensive than say …

Repeat a lie often enough and it becomes the truth, as they say.

Even the Washington Post’s resident fact-checker Glenn Kessler, though he only gave the claim two Pinocchios temporarily, has called the zero dollar amount a “mythical zero.”

Quite frankly, Kessler is using the same fuzzy math to reduce the claim from about five Pinocchios, which it deserves, to two.

Trying to spin $3.5 trillion in new spending as costing zero dollars is among the most shameless, patently absurd attempts to change reality through a talking point ever attempted https://t.co/DlaulhvFTT

It’s quite remarkable how the Democrat Party has become a parody of itself. Conservatives spent years explaining that the mantra of the left is to simply promise people they’re going to hand them ‘free s***.’

And here we have them claiming they’re going to spend $3.5 trillion – very little of which will go to infrastructure, by the way – and it’s going to actually be ‘free s***.”

These people are performance art on a Ringling Brothers stage.

Senator Tom Cotton (R-AR) blasted Pelosi for saying the spending package would cost zero, saying she is “as delusional as President Biden.”

Well, you know what Senator Cotton? I fact-checked your claim that Pelosi and Biden are both delusional. And, lo and behold, I give it … zero Pinocchios.

It isn’t just Republicans calling out the absurdity of the spending bill.

A statement by Senator Joe Manchin (D-WV) points out that “spending trillions more on new and expanded government programs” is the “definition of fiscal insanity.”

New @Sen_JoeManchin statement is BRUTALLY critical of reconciliation. Includes phrases like “definition of fiscal insanity,” & not “reengineer the social and economic fabric of this nation or vengefully tax” — this doesn’t read at ALL like someone who is remotely on board.

Huh. That doesn’t sound like a guy who has been approached by Democrats and convinced of the lie that this spending bill will cost ‘zero’ dollars.

Manchin went on to say he hopes a better path forward can be forged but in the meantime, “I cannot – and will not – support trillions in spending or an all or nothing approach that ignores the brutal fiscal reality our nation faces.”

Video: Matt Gaetz Brings The Heat, Tells Gen. Milley He Would Have Been Fired If Biden Wasn’t So ‘Addled’