Former President Barack Obama had no problem publicly sympathizing with the 2011 Occupy Wall Street movement as members claimed to protest income inequality (particularly in the form of the “99% vs the 1%”). “We are on their side” he said regarding the movement. It was a convenient alliance to make, given that increasing taxes on high-income earners was a policy Obama endorsed.

He even thinly endorsed what we could describe as a “maximum wage” ideologically, though it’s a policy he never pursued. Back in 2010 he admitted, “we’re not trying to push financial reform because we begrudge success that’s fairly earned. I mean, I do think at a certain point you’ve made enough money. But, you know, part of the American way is, you know, you can just keep on making it if you’re providing a good product or providing good service.”

He didn’t specify what that point would be in which someone made “enough” money, nor how we’d determine what that point is. And he’s lucky he didn’t, so we at least can’t call him a hypocrite for the insane earnings he’s going to be bringing in this year. We can brand him a hypocrite, however, for warming up to Wall Street once they began offering him a paycheck. 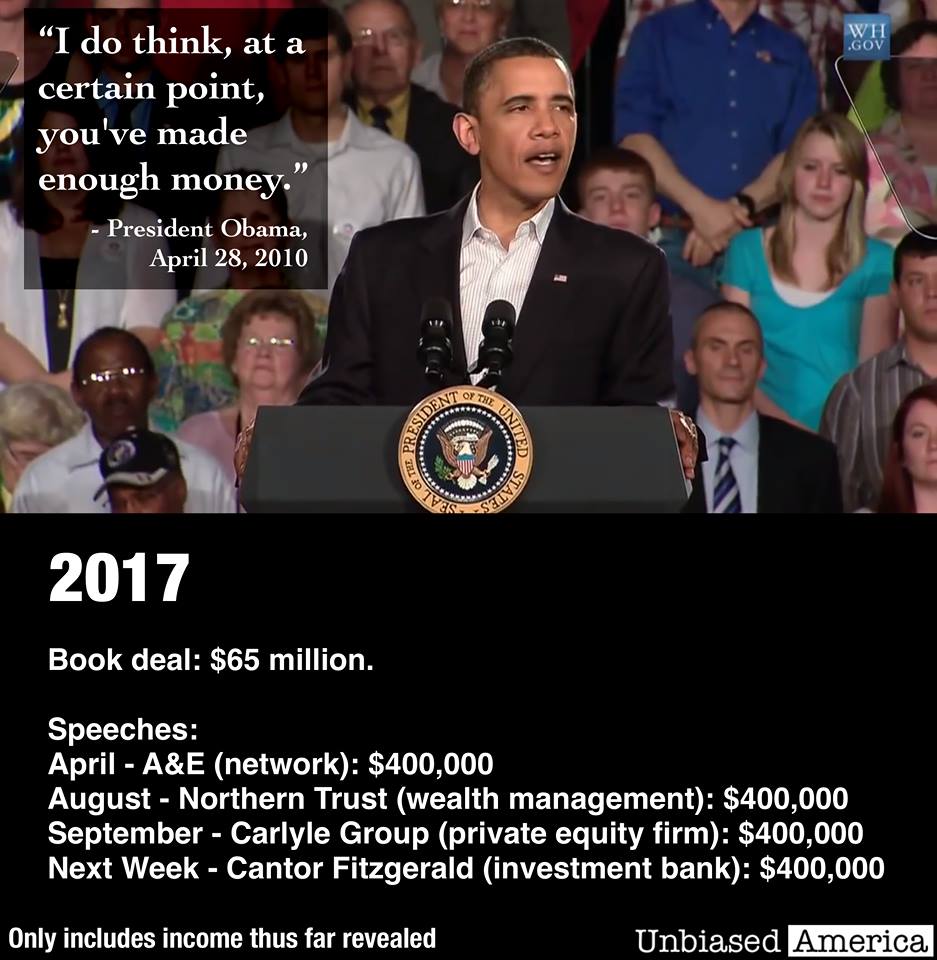 You read that right: Obama’s earning $65 million for a book that we can only assume will be ghostwritten, and $1.6 million for four speeches.

Not a bad gig – and that’s just year one!

He’s going to have a bright future ahead of him giving speeches, so long as he milks it as effectively as the Clintons did. Bill and Hillary made a cool $153 million in speaking fees after Bill left office, and there’s no reason to believe Obama can’t do the same.

I’m not attacking Obama and the Clintons for making money. After all, the most recent year of income documented for President Donald Trump was $150 million in 2005. If I had a problem with the rich, I’d be attacking him too. The difference is obvious, however: Trump glorifies entrepreneurship, risk-taking, and the creation of wealth, while Obama and the Clintons didn’t mind demonizing it.

Share this story if you think Obama is a hypocrite!