The video below (although grainy) was explained to have shown 20-year-old Hakim Littleton armed with a 25-caliber blue steel semi-automatic pistol. The video release was an immediate one to quell rising false narratives that the suspect was unarmed.

One of the narratives mentioned how the police officers were to have fired the first shot, but in the video, Littleton fired at officers around three feet away.

The first sign of trouble was when the guy got out of his vehicle. Never, never get out of your vehicle during a traffic stop. Your chances of having a terrible day will go up a thousand percent.

This will teach the Left nothing since they don’t care about police officers or facts. They care about posturing in a manner that makes them feel enlightened and righteous. 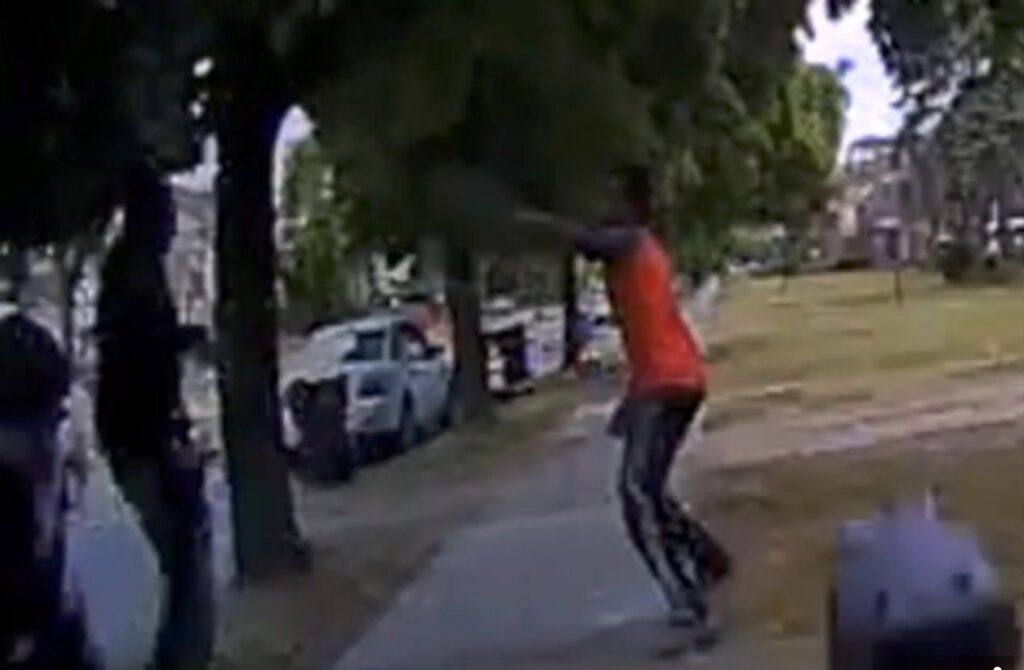 THIS IS A WAR, AND WE DIDN’T ASK FOR IT

This is war; we did not ask for it and has been forced on us by agents of the DNC in all their many flavors. The DNC has normalized violence as an electoral tool; as of one week ago, 600 people have died in this rioting, looting, and rebellion by any other name.

The DNC is basically a criminal enterprise masquerading as a political party. They have so corrupted the intent of our electoral process so that their criminal endeavors are maintained, and their power over others is entrenched.

This is civil insurrection and civil war and needs to be decertified since they are no longer Americans as you or I know them, and deserve death for all the misery they have caused this nation, now is the time to stand, your ground they are taking the nation to civil war once again, for the second time in 150 years, they deserve consequences that shake the planet earth.

I strongly recommend that everyone read “On Combat” by Lt.Col. Dave Grossman. He has devoted his life to the study of the psychological, physiological, and emotional issues attendant to those whose job it is to “protect and serve” or to “close with and destroy the enemy by fire and close combat.”

In other words, he’s talking about police and soldiers. Among the things that will surprise you is that killing another human being is an unnatural act. Nearly all humans recoil from actually doing it.

Another point that surprised me is that hardly any of the training provided to police prepares them to walk into a situation that rapidly goes terminal. Even when the training is excellent, the human factors that impact how a cop reacts in any given case are subject to a host of variables.

We try so hard, in this goofy society, to understand the criminal and afford him lots of sympathies (his momma beat him, etc.), but we judge cops from the vantage point of ignorance.

Unless you do the work, day in, day out, you are ignorant of what it is like. When a bullet comes so close to your head that the cracking sound hurts your ears, at that point, your life has changed.

For cops, these academic discussions are enraging, if you haven’t “been there, done that” best keep your opinions respectful and sympathetic. Defund the cops, and one day, you may be making those life and death decisions yourself.

COPS WILL ALWAYS BE A PAIN

There will probably always be a cop on occasion who is a pain, but I have found that most of them are actually nice and very polite, and I always make sure I’m very respectful towards them.

It’s been a while since I’ve had an encounter with a police officer, but I’ve had them let me go with no ticket when speeding, and they’ve also lowered my speed on a ticket a couple of times because of my good driving record.

I have a family member who is not only a cop but was also a State Trooper in the state of Maryland. This family member is precious to us all. Every day that he walks out of his home, he does know that he could very well come back in a body bag.

Support your local crime fighters. They are the only ones standing between you and those crazy people who have been paid to kill anything that moves on two legs.

Its amazing to me how stupid some people are. This guy must have wanted suicide by cop approach to the end of his life.

There’s a whole new generation out there being taught that the Police don’t have the authority to order the perp to stop, and this is the result.

California Archbishop Indicates Pelosi And Biden Should Not Be Given Communion