While the League was fine to tolerate protest as “free speech,” they didn’t hold one player’s celebration of Christmas to the same standard. New Orleans Saints running back Alvin Karama was fined $6,079 by the NFL for wearing Christmas-themed cleats to a game on Christmas Eve.

According to Fox News,

The Offensive Rookie of the Year candidate then started a GoFundMe drive, saying he’d donate all proceeds to an organization that provides cleats to youth football players. He wrote: “Unfortunately The Grinch stole Christmas!! After the game I said that I would make a gofundme for the fine and donate the proceeds to charity sooooo…. here we are! A donation will be made to  Willie Hall playgrounds recreational department to provide cleats for their youth football programs.”

More from the report:

The NFL’s strict enforcement of its dress code has generated complaints, especially after the league fined players for wearing custom-made patriotic footwear.

It led the league to allow all players to wear special cleats for one week this season to call attention to charitable causes.

The league also denied the Dallas Cowboys’ request to wear decals on their helmets to honor five police officers killed in a 2016 ambush attack.

This reveals an inconsistency on behalf of the League, because there’s been other politically-themed attire that players have gotten away with. Colin Kaepernick didn’t run into any trouble when he wore socks depicting police officers as pigs to a game – which should’ve violated the League’s dress code. 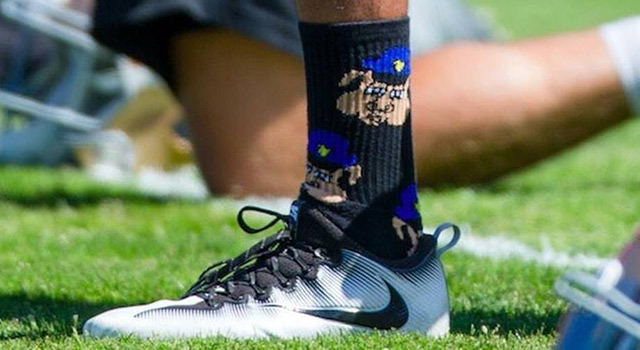 Perhaps the problem isn’t the dress code at all, but rather the message the cleats represent.

Share this story if you think the NFL has double standards!