The Wapakoneta Daily News in Ohio was left embarrassed and apologetic after a front page photo of President Trump was seemingly doctored to make the President resemble Adolf Hitler.

The photo accompanied an article regarding a reader poll the newspaper conducted on the President’s handling of recent natural disasters.

Interestingly, the article frames those disasters as a comparison to how leaders in history have handled certain crises.

“History tends to judge presidents by how they handle crisis during their time in office,” the column begins.

They then used an image which appears to have doctored Trump’s face to look like that of an evil historical figure, Hitler. 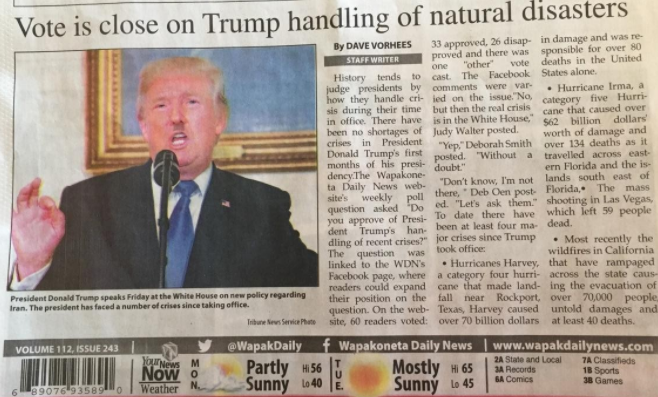 For those having trouble seeing it, let’s zoom in on the photo a bit … 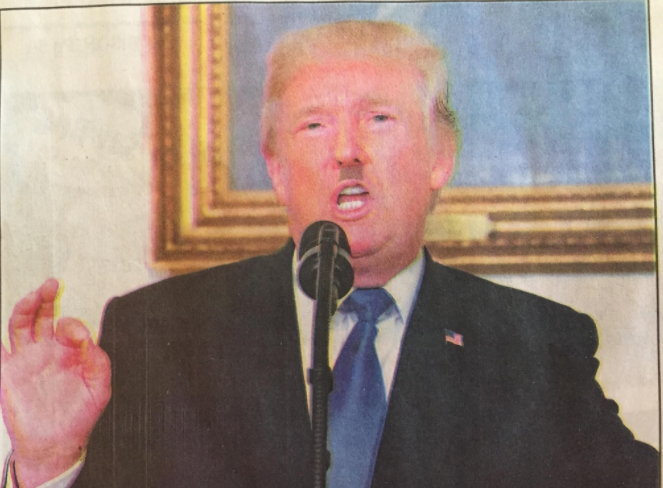 That is a remarkably coincidental placement of a patch of gray that eerily resembles a Hitler mustache. It almost looks like a young child drew it in and then they printed the photo.

Remarkably coincidental is what the newspaper would like you to believe, however.

The Wapakoneta Daily News issued an apology of sorts, stating that the published image was nothing more than sloppy editing on the part of their staff who are inundated with numerous photos per day.

“The Wapakoneta Daily News regrets the image of President Donald Trump published on Page 1A of Monday’s newspaper,” a statement reads on social media. “While we edit photos on a daily basis, this particular photo was edited in a sloppy manner to make it appear the president had a mustache.”

Their determination that the Trump photo was simply ‘sloppy’ editing was accompanied by a statement that it was “an unfortunate incident which we continue to investigate and we offer our apologies to our readers.”

What’s to investigate? You already explained what happened, right? Unless … unless it wasn’t really sloppy editing.

“The Wapakoneta Daily News would never intentionally insult our president in any manner,” they added.

Coincidentally, Trump just tweeted a message hours ago that the belief by the American people that the “media is inventing stories” about the President is much worse than is being reported.

“46% of Americans think the Media is inventing stories about Trump & his Administration.” @FoxNews It is actually much worse than this!

Do you think this image was an accident? Share your thoughts below!