A handful of prominent journalists took shots at Fox News over the deaths of a cameraman and young female producer in Ukraine.

Word surfaced on Tuesday that two journalists for Fox – producer Oleksandra Kuvshynova, 24, and cameraman Pierre Zakrzewski, 55 – were killed in an attack outside Kiev.

Lucas Tomlinson, who covers the Pentagon for the network, tweeted: “RIP Pierre and Sasha.”

RIP Pierre and Sasha. From our last correspondence:

I will effort to get as much of this on TV to help Ukrainians in every way possible. Keep Smiling.
Pierre pic.twitter.com/StinVdSfFK

For reasons known only to her, Susan Glasser, a staff writer for the New Yorker and CNN, condescendingly commented on the tragic deaths while criticizing Fox News anchor Tucker Carlson.

“What a tragedy,” she wrote, as some observed, in a possible sarcastic tone. “A cameraman died covering the war for a TV network that airs a pro-Putin propagandist as its top-rated primetime host.”

What a tragedy. A cameraman died covering the war for a TV network that airs a pro-Putin propagandist as its top-rated primetime host. https://t.co/zKHXRciMYu

That ‘top-rated primetime host is clearly Carlson, who has raised the ire of war-mongering pundits and lawmakers by daring to opinionate on the Russian invasion of Ukraine and opposing American intervention.

Glasser posted a follow-up tweet, again taking a jab at Fox News and their supposed “propaganda.”

“So grateful for the heroic work that Pierre and all the journalists, Ukrainian and foreign, have been doing risking their lives to show us the horror of this war,” she wrote. “Makes the years of lies and propaganda so much harder to take — there are truly deadly consequences.”

The CNN contributor was on the receiving end of some harsh criticism.

Newsbusters managing editor Curtis Houck wrote: “Did you tweet that from your nice digs in D.C. or Martha’s Vineyard? You’re terrible.”

When you can’t even share condolences without snark about the network.

Consider taking a pitch every now and then. https://t.co/ulifbwYiiO

This is what we call a scumbag. https://t.co/cK5erVacHi

While most verified journalists on Twitter expressed sincere condolences over the deaths of cameraman Pierre Zakrzewski and producer Oleksandra Kuvshynova, others actually echoed Glasser’s comments. 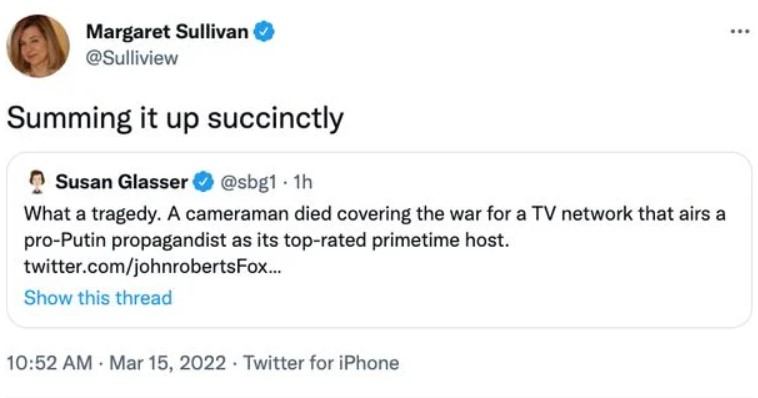 “Fox News just lost a visual journalist killed by Russians in Ukraine and their hosts right now are talking about the cost of pajama bottoms at Target,” tweeted Brown. “I am not kidding.”

Fox News just lost a visual journalist killed by Russians in Ukraine and their hosts right now are talking about the cost of pajama bottoms at Target. I am not kidding. pic.twitter.com/uq20n9lvWS

How dare they cover inflation and a potential recession that negatively impacts every American.

“Up next on Fox: a discussion about the liberal media in Ukraine,” she joked.

Of course, several viewers noted that Brown managed to get a screenshot of a particular Fox News segment that veered off temporarily onto the news of the day but failed to note the several segments and mentions of the deaths of their colleagues.

Fox News has been covering it all morning including a segment with his colleagues on the ground in Ukraine. These people are telling on themselves. https://t.co/OkjndyIYJU pic.twitter.com/vLIYNZUvyC

Trust me, people at Fox are grieving and upset. But because there’s a war in Ukraine, that doesn’t mean a network stops covering inflation at home — a huge story that disproportionately affects the most vulnerable Americans. https://t.co/XP6kEnOmLg

They uh, they multi-task and report on different topics throughout the day.

Apparently that’s a foreign concept at the Miami Herald?

Olga Rudenko, a verified journalist for The Kyiv Independent, tried her hand at shaming Fox News as well.

“This is the Ukrainian member of the @FoxNews crew. She was killed today alongside their cameraman,” she said, sharing an image of the young woman. “Fox News doesn’t even mention her in their report.”

Shane Vander Hart, the editor at Caffeinated Thoughts, pointed out that Rudenko didn’t have her facts straight.

“Olga, this is wrong. They reported on it BEFORE you tweeted this,” he replied, linking to her own article, a news segment, and a tribute video at Fox.

Olga, this is wrong. They reported on it BEFORE you tweeted this.

She got her own article: https://t.co/mPZ91xfAP6

They aired a news segment: https://t.co/9zCC3WIfHa

They posted a tribute: https://t.co/snG7Bqsiwq

There’s not much to be surprised about here. Outraged, yes. But surprised? Left-leaning media will always offer knee-jerk reactions to deaths in which they can make a political point with glee.

That’s exactly what Glasser, Sullivan, and Brown did here. It says a lot about their character.

“This person (Brown), CNN or the Washington Post don’t give a shit about this guy,” he wrote. “They are using his death to ‘But Tucker.’ It’s all they know.”

Hunter Biden On List Of Americans Sanctioned By Russia