Like every other coastal state, New Jersey leans Democrat. And in Union County, New Jersey, nearly 70 percent of people voted for Hillary Clinton.

Despite that, an anti-Trump billboard wasn’t welcome even there, even though the people there largely voted against The Donald. Neil Harrison, a political activist from the Bronx, paid $1,000 for the billboard to spread his anti-Trump message. He said he chose New Jersey instead of his native New York because his home state doesn’t allow for political messages to be put on billboards.

The billboard is also serving as a promo for Harrison’s upcoming documentary “Our Leader The Idiot.” The film has no web presence in the form of a Facebook, Twitter, or IMDB page to promote it, leading me to believe it’s some low-budget homemade documentary, not an actual project. 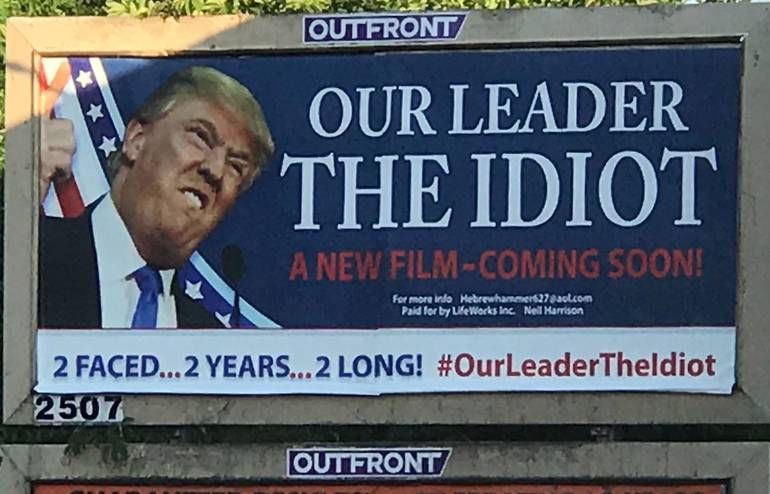 According to the Daily Wire, “Union Township Public Information Officer Natalie Pineiro, who acknowledged the billboard did not violate any local ordinance or law, told the Associated Press that the Monday following the introduction of the billboard she received “dozens” of voicemails from residents angered by the billboard’s contents. She added that over 100 negative comments on the town’s Facebook page were posted.”

Officer Pineiro criticized Harrison’s claims that he was promoting a documentary (which there not yet any evidence of), calling his true motives “transparent.” “It’s clear what his intentions were and now the township has been the recipient of his circus-like crusade.” She said the billboard was not a representation of the town’s values, adding, “No matter what, it’s about common decency and respect for us. … It has been a resounding outrage to the fact that somebody is going to these lengths to attack a sitting president. It’s something we’ve heard equally about from residents no matter their party, age, demographic. It’s something that’s caused a stir here.”

The township later clarified on their Facebook page that the billboard wasn’t sanctioned by the township, but is supplied by a private company.

Residents, it’s come to our attention that a potentially offensive billboard has gone up on Morris Ave promoting a…

This is hardly the first time the Right is revolting against the Left in these politically charged times.

Of course, the real victories are political. Republicans are far outperforming Democrats on a whole handful of metrics, including their favorability, the amount of money they’re raising, and of course, their ability to actually win elections.

Living in a state with 70% of the population being operatives of the Democrat-Communist-Islamic-Nazi Terrorist Organization, is somewhat scary to us 30%.
It’s something like the inmates running the Asylum.

Do you think I could pay for a billboard in that town that had 2 pictures on it. The left half would be a bunch of KKK riders in hoods, holding a burning cross and the right half would be a bunch of antifa people in black masks, smashing property with clubs and punching people. The caption would read, “Why do Democrats like to cover their faces when they protest??” Do you really think the town would let that happen? No, but they let this happen. I guess it’s free speech only if they agree with it.

Ha ha ha , remember folks it’s the people who say Trumps an idiot are the ones who insist there are more than two genders , they refuse to call a boy a boy and a girl a girl they insist on calling them “Theybies” , they’re fighting to convince people that pedophilia is the same thing as being gay or lesbian and they voted for an anti American Islamic communist twice for President .

They’re just furious that Trump is being Universally praised as the greatest President of all time :

Trump in a mere year and a half with both establishments, the American intelligence community and the entire main stream media trying to sabotage him accomplished the below :

Charles Evers (Civil Rights leader Medgar Evers brother) said Trump has surpassed his promises to the black communities and has done more good in a year and a half than democrats have in the last 30 years.

Chris, don’t list any of Trump’s accomplishments, they left will have a cow when they find out! Then they will wonder how come they never heard of all these things, as they sit down to watch CNN or MSNBC!!!

LOL……You keep poking the lion with that twig and he will give thought to taking your hand off….Good to see the mental instability of the left being publicly challenged, good to know that decency and moral adequacy for the right to civility can be reclaimed and that the hate and intolerance that spews from the mouths and minds of the left is just the smell of the stench they bring to the table….

It makes me sick. I did NOT vote for Obama but I also did NOT act like some crazy person. This is just crazy and should stop already.