Last November, thousands of anti-Trump activists organized and marched in New York City to protest the outcome of the U.S. presidential election. On Facebook, the event was shared with over 60,000 Facebook users, and got nearly 10,000 RSVPs. Between 5,000-10,000 attended, including crockumentary filmmaker Michael Moore. 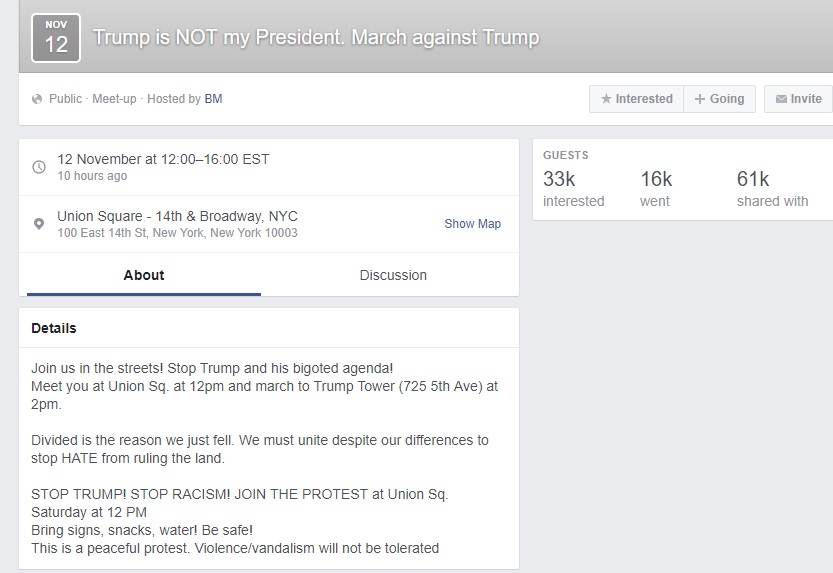 As it turns out, the event was organised by Russian operatives through social media.

According to The Daily Wire, “the Russian operatives organized the rally deliberately, to fan the flames of dischord that emerged following President Trump’s election, apparently in the hopes that such unrest might throw the United States into a tailspin.”

More from the report: “But while the rally didn’t manage to destroy the very foundations of American democracy, it did attract some famous faces — notably, it seems, Michael Moore, who “headlined” the march, and filmed the event for his forthcoming anti-Trump documentary, ‘Michael Moore in Trumpland.'”

There’s plenty of anti-Trump actions that Russian actors have taken, but it’s only the pro-Trump ones that the media seems to care about, endlessly beating the drum about supposed collusion between the Trump campaign and the Kremlin. The faux-Black Lives Matter group that the IRA posed as was identified by Facebook as a main group behind 470 dummy accounts and thousands of Facebook ads – but appears to be one of the few accounts still active after the election.

As we reported yesterday, it was confirmed by representatives from Facebook and Twitter in testimony before members of the Senate that there were anti-Trump activities from Russian actors.

Sen. Lindsey Graham inquired: “During the election, they were trying to create discord between Americans, most of it directed against Clinton. After the election you saw Russian-tied groups and organizations trying to undermine President Trump’s legitimacy. Is that what you saw on Facebook?”

Too bad that doesn’t fit the Left’s media narrative. Perhaps then that fact would be getting some attention.

Joe Biden Fires Back At Reporter Who Asks About Cognitive Test: ‘Why The Hell Would I Take A Test? C’mon Man’