The tsunami of sexual assault allegations against men in power has claimed its first fatality.

Less than three days ago, Kentucky state representative Dan Johnson found himself accused of sexually abusing a teenage girl at the church where he was a pastor. More specifically, he was accused of molesting a member of his church in 2012 when she was 17. “What you did was beyond mean; it was evil,” the victim said she wrote in a Facebook message to Johnson shortly after the alleged assault.

The publication Kentucky Center for Investigative Reporting broke the story, leading to bipartisan calls for Johnson’s resignation. Johnson maintained that the incident never happened. “This allegation concerning this lady, this young girl, absolutely has no merit, these are unfounded accusations, totally,” he said on Tuesday

Kentucky Rep. Dan Johnson refused to resign and said an allegation that he sexually assaulted a teenager “has no merit.”

Leadership of BOTH parties in Kentucky have already called for Rep. Dan Johnson's resignation — just hours after #LongCon was posted. Read it here: https://t.co/dlFJAc75Eb https://t.co/PRWlNnBYWx

Yesterday, Johnson posted the following message to Facebook right before shooting himself in the head near a bridge in Mount Washington, Kentucky. Johnson was 57-years-old. 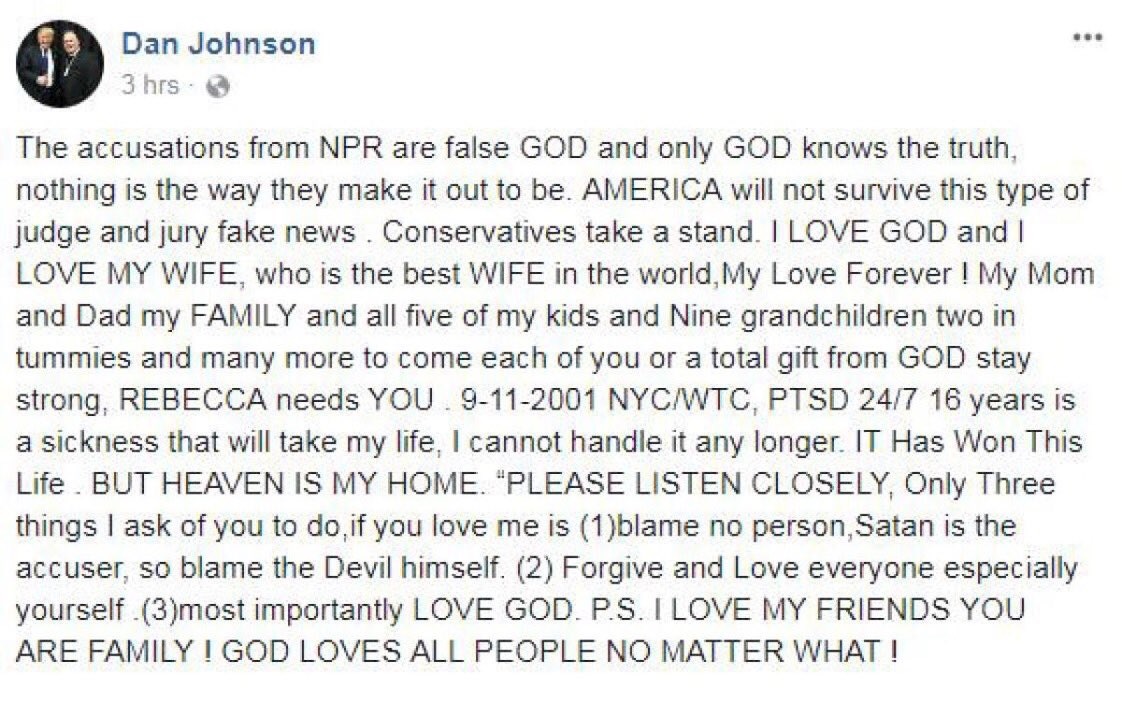 NPR clarified in their reporting on Johnson’s suicide that they never investigated nor reported on the story of the sexual misconduct allegations plaguing him. While unverified, many will see Johnson’s suicide as verification that he’s guilty as charged. Others more sympathetic to him may view him as a man pushed over the edge. Regardless, we’ll never hear a confession from him now.

Like clockwork, it didn’t take long before liberals began celebrating his death.

Praise the Lord, and pass the ammunition…

While Johnson may very well be guilty, the man has still fallen victim to mob justice – and the mob didn’t even need to do the lynching. He was tried, convicted, and executed in the eyes of public opinion before the legal system had a chance to determine the truth of the matter.

Tell us your thoughts below on the malicious behavior of liberals.