Editor’s Note: This article was updated to clarify that Kamala Harris said in April 2019 that she believed the women who accused Joe Biden of inappropriate touching.

While the mainstream media crows about the “historic nature” of Joe Biden’s selection of Kamala Harris as his vice presidential running mate, the truth is that the selection confirms – once and for all – that Biden’s campaign is driven by one thing.

Kamala Harris is an unbridled opportunist. Someone who will say and do anything to get ahead. She ran for Attorney General of California as a law-and-order Democrat.

In office, she happily jailed non-violent drug offenders, oversaw the disproportionate incarceration of African-Americans, cheerleaded for a truancy bill that could jail single mothers, and hid evidence of a man wrongly convicted of murder.

Kamala the Presidential candidate pretended none of this happened. She went from law-and-order Democrat to the woman auditioning to be the preferred candidate of the most radical elements of the Democratic Party.

She offered a full-throated endorsement of the Green New Deal, supported absolute open borders, abortion on demand, and advocated for doing away with private healthcare insurance with her Medicare for All scam.

She has even peddled in “Defund the Police” causes.

Kamala’s opportunistic 180 degree turn on policy didn’t work in securing her the Democratic nomination. Rep. Tulsi Gabbard’s devastating takedown of Harris in one of the Democratic debates effectively ended that effort, but it did win her the next best thing.

Kamala the Presidential candidate and her running mate Joe Biden disagreed on many of the signature policy debates. From healthcare to the environment to immigration, Biden and Harris clashed.

However, it wasn’t just policy that candidate Harris and Biden clashed on. Harris was arguably Biden’s largest and most vocal critic.

Going as far as to insinuate that Biden was a racist, or at least that he was willing to cozy up to racists, that his previous policies had been racist, and most amazingly, that Harris believed Biden’s accusers – who have accused the former Vice President of inappropriate touching.

So what exactly do Kamala Harris and Joe Biden agree on? Their signature issue, and the one thing that unites Democrats, is hatred.

“Biden’s campaign is driven by one thing.

Hatred of President Donald J. Trump and the tens of millions of Americans who voted for him. You don’t have to take my word for it, Biden supporters openly admit it.

Indeed, a new poll conducted by Pew Research shows that while there are a variety of reasons that Trump supporters support him (leadership/performance and his issue/policy positions top the list), for Biden supporters only one thing unites them.

A whopping 56% of Democrats said the reason they support Joe Biden for President is because “he isn’t Donald Trump.” The second most mentioned reason, his “leadership/performance,” was the choice of just a paltry 19% of Biden voters.

As the Cook Political Report’s Amy Walter pointed out on Twitter, the poll demonstrates, “if Biden wins he would come into office without any sort of political or policy mandate other than being ‘not Trump.”

Another way to look at this chart: If Biden wins he would come into office without any sort of political or policy mandate other than being “not Trump”. pic.twitter.com/sXHa5Slgx2

What a sad state of affairs for the modern Democratic Party. While the Biden campaign and his handmaids in the national media will try to convince us that the race is about “issues,” it clearly isn’t.

If it were actually about issue and policy, if healthcare or immigration or trade or the environment actually mattered, then Joe Biden would have selected someone who more closely mirrors his position on those issues.

But it’s not about any of those issues, the Biden/Harris ticket isn’t offering the country a different path forward, they are offering nothing but hatred for Donald Trump and his supporters.

In 2016, the left happily trotted out their “Love Trumps Hate” slogan. 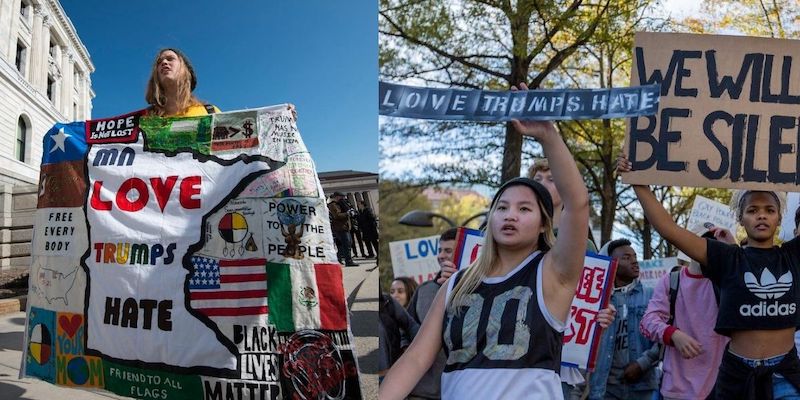 What a difference four years makes. America deserves better than this.