According to a bombshell report in the Wall Street Journal last week, White House Chief of Staff John Kelly could be the next departure from the Trump Administration. The Journal reports that Kelly told colleagues he doesn’t intend to stay in the role beyond his one-year anniversary, which is coming up soon on July 31st.

The White House has denied the report. “I spoke to the president who refuted this article. He said it is absolutely not true and that it is fake news,” said White House spokeswoman Lindsay Walters. Interestingly enough, Trump wasn’t as precise in his language when speaking directly on the subject. “We’re getting along very well” he said. Then he added, “Look, at some point, things happen but I will tell you … we have a very good relationship. He’s a wonderful man.”

There have been times in the past that the White House denied rumored resignations that did come to fruition, but that’s only been true in a minority of cases. And this is hardly the first time that there have been rumors about Kelly leaving the White House, with the most recent being back in April when it was reported that Kelly referred to President Trump as an “idiot.”

“I am committed to the president, his agenda, and our country,” Kelly later clarified. “This is another pathetic attempt to smear people close to President Trump and distract from the administration’s many successes.”

And before that, there were rumors of a Kelly resignation in February. (RELATED: John Kelly’s Firing May Be Imminent as Story Continues to Unravel.)

Just take a look at the following screenshot to get a feel of how reporting on Kelly’s imminent resignation has been. 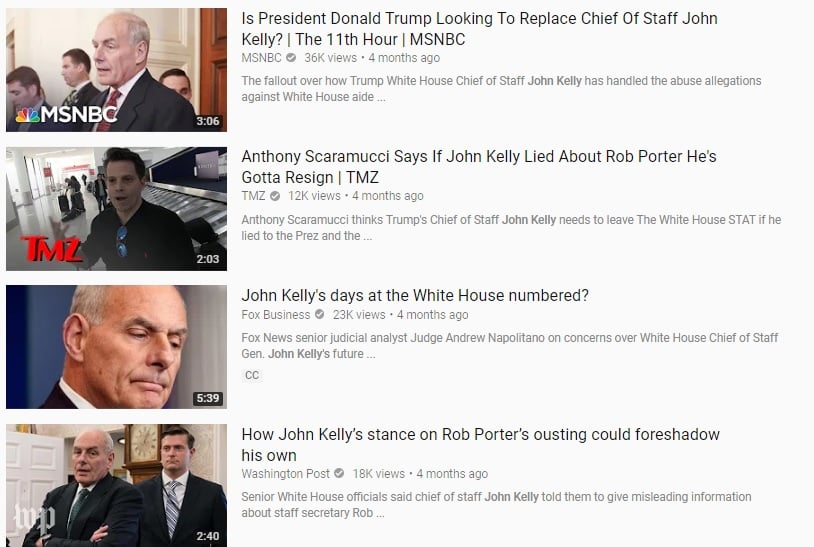 In those cases, the media was wrong about Kelly’s departure. But will they be wrong again?

If Kelly departs, he’d be the second White House chief of staff to leave, the first being former RNC chairman Reince Priebus. According to Politico, Vice President Mike Pence’s chief of staff Nick Ayers, Congressional Budget Office Director Mick Mulvaney, and Treasury Secretary Steven Mnuchin are all names being floated as potential Kelly replacements, but then again, we don’t know if these reports are true or not. As usual, they’re relying on anonymous “sources.”

TO SOLVE AMERICAS PROBLEMS MAKE THIS CHOICE WE THE PEOPLE’ HAVE THE POWER OF OUR VOICES AND OUR VOTES, TO VOTE OUT THE ENTIRE LYING,CORRUPT, TREASONOUS DEMOCRAT PARTY COME NOV 2018, VOTE TO MAKE AMERICA GREAT AGAIN AND TO END ALL CORRUPTIONS IN WASHINGTON GOVERNMENT

Usual Fake Lefty News. How about the IG NEWS ??

When John Kelly and President Trump make the announcement, then I will believe it. So far all I’ve heard is the usual D.C. gossip and a denial from both General Kelly and from President Trump.

Which is yiddish for BS.

Obviously another victim of the Democratic Party’s domestic terrorism.

TAKE ALL DEMOCRATS OUT KNOW BY FORCE..ANY WAY YOU HAVE TO

The man has served his country honorably for his entire adult life and if he does leave it will be to take a much deserved retirement. He has put up with more than any man of his caliber and background should have to. May GOD bless him and keep in whatever he does and may GOD damn all of the scum that are trying to take down the President through him.

The Fake Media Has Wanted John Kelley Out Of ANY Position Since He Joined The Trump Admin.He Is Too Careful –Won’t Let Some Dumb-bell Get Dangerously Close To Our President…Rumors,Rumors.If He Resigns I hope Another Military Officer Takes Over For The Position…

Whenever you see the media using terms like “sources close to the White house” or “officials” or “white house insiders” you can be sure it is fake news. Those are all code words for fake news. The corrupt leftist media uses unreliable and fictional sources for their information…then complain that the white house is lying when they ask questions….. lol….morons need to verify the information from their so called “sources” before spouting everything in public as fact….fools.

Bingo. Especially since the WSJ has aligned itself with the Deep State Cabal, to mislead the people.

All of Trumps faults don’t measure up to the corrupt Democrats, pay attention and see corruption at work.

Whatever actions Our President Trump deems necessary to run our Country efficiently, is fine with me.

I’m not so sure. I would not give anybody card blanche to do whatever “they” thought was necessary to keep us moving forward.Cuba gave Castro card blanche, Venezuela gave Chávez card blanche, Hitler, Stalin, and Mao all had card blanche. Even Shakespeare recognized this in Julius Caesar –
“Who gives him this power? We do.”