The controversy over NFL players kneeling during the pregame National Anthem reached a boiling point over the weekend after President Donald Trump slammed the practice during a rally in Huntsville, Ala., and now actor Jesse Williams has thrown in his bizarre two cents.

Appearing on MSNBC Live with Thomas Roberts, Williams – who’s best known for his role in “Grey’s Anatomy” – called the NFL’s pregame National Anthem ceremony a “scam” designed by the U.S. Department of Defense to convince “boys and girls to fly overseas to kill people.”

“[The pregame national anthem] was invented in 2009 from the government [by] paying the NFL to market military recruitment – to get more people to fight wars to die,” Williams told Roberts. “They’re marketing and pumping millions of dollars into the NFL to get us to put on a pageant in front of the NFL football games to get you to go off and fight.”

While I’m not sure why anyone was asking Williams his opinion in the first place, he appears to be referencing a practice called “paid patriotism” which was actually uncovered by Republican Sens. Jeff Flake and John McCain in 2015. Flake and McCain also condemned the practice, a fact which I’m sure Williams either doesn’t know or has purposefully overlooked. Furthermore, the contracts drawn up between the Pentagon and various sports leagues did not require the the players’ presence on the field during the ceremonies – another fact of which Williams is likely unaware.

In fact, the requirement that players are present and standing comes from the player’s union’s collective bargaining agreement. (Yes, the millionaire snowflake players have a union.)

So, where exactly did Williams get his information? Apparently, from a Facebook meme: 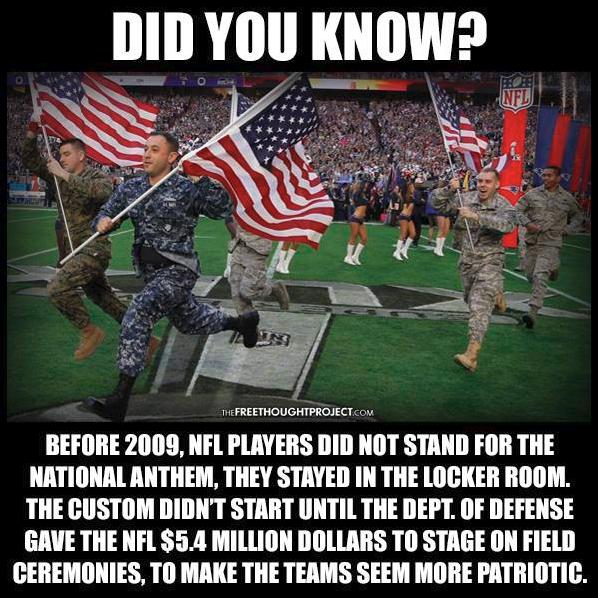 But, blissful in his ignorance, Williams went on to attack not only the NFL as an organization, but the team owners who donated to President Trump’s campaign:

“I think we have a perception that athletics is entirely a meritocracy and the NFL proves that… We know that seven or eight owners gave Donald Trump $1 million each and are friends with a horrible guy who thinks he’s a dictator, who treats America like it’s a game show.”

What? Of course athletics is a meritocracy – participation awards don’t make professional athletes. And what in the world does that have to do with choosing to donate money to Trump?

In my opinion, this whole thing is overblown. Americans don’t want politics in their football or any other sport. If players want to kneel, let them kneel and move on with the game. You can change the channel if you don’t like it, but drawing attention to their decision will only exacerbate the situation further. And then what happens is we end up with “news” segments like the one above where actors use Facebook memes as proof of widespread racism and corruption.

Can we just get back to football, please?

What do you think? Should we care what actors think? Leave your comments below!