It’s been a roller-coaster for Hope Hicks.

The longtime Trump aide was formally made White House Communications Director yesterday. Prior to, she was serving as interim director after Anthony Scaramucci left the job.

Hope was one of the Trump campaign’s earliest staffers, and she’s a trusted advisor to the president.

I’m sure the promotion was very much appreciated by Hicks. She put in the long, grueling work on the campaign trail. She deserves this job.

Unfortunately, the celebration didn’t last long. Hicks just got bad news from Twitter. It appears her account has been suspended:

After mocking her for being unverified, Leftists mass-reported Hope Hicks’ account.
Because she was unverified, Twitter didn’t protect her. pic.twitter.com/rNrjHr2KOW

Can you believe it? Not even 24 hours after being put in charge of White House communications, a Twitter account that allegedly belongs to Hicks has been suspended.

It should be noted that it’s not verified if the account, which has the handle @HopeHicks45, really belongs to Hicks. But if you google “Hope Hicks twitter,” it’s the very first result you get. 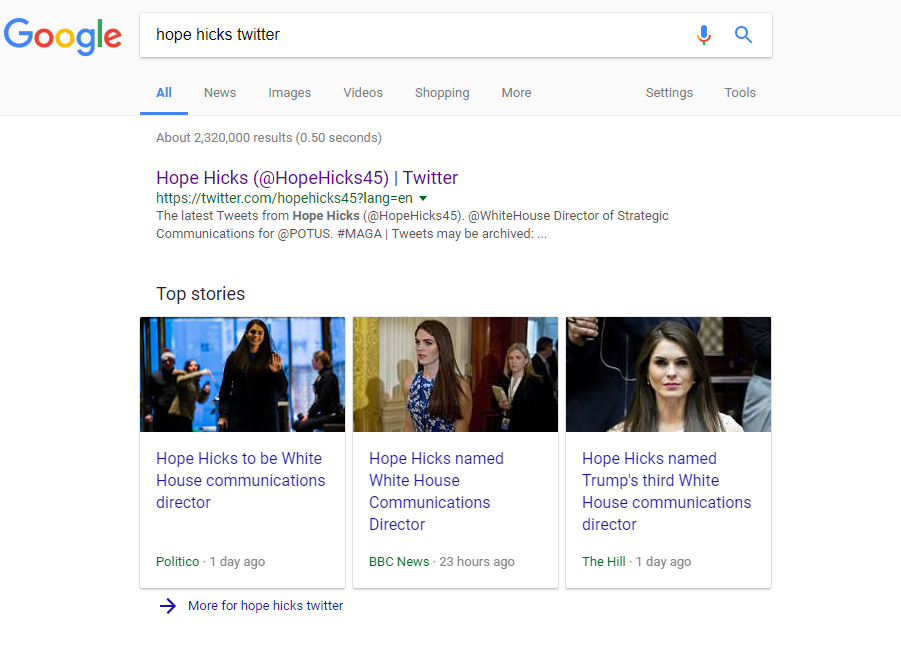 Real or not, liberals, right on cue, unleashed their nastiness, mocking Hick’s misfortune:

The new Communications Director for the White House is doing a great job so far! pic.twitter.com/w0o1wNJfVc

If Twitter did in fact suspend Hope Hicks’s account, the company needs to fix it. Otherwise, it’s political censorship.

FCC has NOTHING to do with Twitter. Besides… Trump wants to get rid of the FCC. Sounds like Charles is a liberal. ;-)

oh BOO- HOO! WHAT A CRYBABY!

Frumpy, Off your meds again, I see.

Baby Hope Hicks is a cry baby.
Boo Hoo for you. ;-)
What a conservaturd snow-flack LOL

Sign the Petition…!!! What a load of crock. Although I am surprised that you are interested in conservation legacy (with a nice picture of a leaping wildcat) and dead chickens from Tyson.

These sound too liberal for you.

Conservaturds prefer dead wildcats and dead chickens as long as someone else makes money from their demise.

Would be too bad if Twatter’s licenses were all suddenly suspended also.

GOOD! Let’s get Daddy (aka Trump) OFF of Twitter!

Sue this video is specifically for you as to why your beloved Killary didn’t win! Maybe it will help you to understand “what happened.” LMAO!

So, where is the FCC on this? Nary a peep.

Why do YOU care about the FCC?! Trump wants to get rid of the FCC!

Thank you. Calling 991 will get you nowhere. ;-)
Perhaps you are not too bright to know this.

why don’t you change your name because trash like you don’t deserve the first name of Ivanka. B*tch you’re lucky you can hide your fat ass behind your computer but sooner or later your big fat mouth will get your ass in some deep trouble. You watch and see. I guarantee it! STFU you bloody douche bag. Nobody cares about you or what you stand for….go f**k yourself creepy M.F.

WOW! I guess you are not an upstanding Christian. What a nasty mouth.

Do you EAT with that filthy mouth of yours?! Learn to respond with some dignity!!

You wouldn’t know dignity Sue Everson if it spit in your face! Your site says you have empathy, but you don’t or you wouldn’t have made the cheap shot you did about the school shooting in Washington. You are really a miserable bit*h aren’t you?