Hillary Clinton Slips Walking Down Stairs Twice, Despite Two Men Holding Her Up

It has shades of the video we saw leading up to the election of Hillary Clinton dropping due to a case of the flu, then being tossed head first into the Scooby Van.

During a recent trip to Mumbai, India, Clinton needed the support of two men to get down a set of stairs at the Jahaz Mahal, an ancient resort built during the Lodi Dynasty.

Video footage shows Clinton slipping twice, as if somebody had applied a lubricant to the bottom of her shoes ala Chevy Chase’s sled in the movie Christmas Vacation.

You can feel your heart race a bit just watching her try to navigate the stairs, a simple task turned into an adventure …

Thank God CNN explained to me how Hillary being in bad health was just a “conspiracy theory,” otherwise I might question why she’s totally incapable of walking down stairs even while being supported by two men. 😐 pic.twitter.com/2ekGFE7alB

Holy cow. That last slide looked familiar. Where have I seen it before? Oh yes … 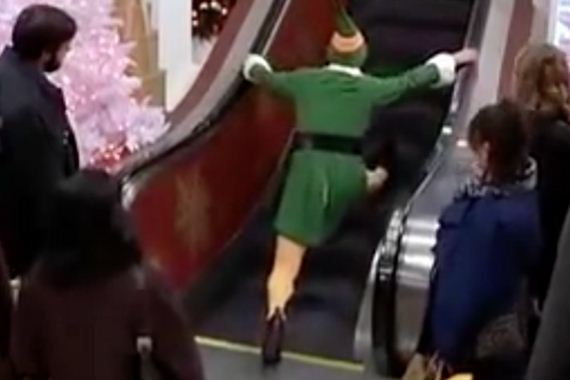 Clinton managed to slip once, which is certainly understandable considering the steps are made of bone-dry stone, a notoriously slippery surface, and the fact that she can’t even climb into a van without taking a header.

But then, with the aid of two men on each side holding her up by the arms, she manages a slide that would make Ricky Henderson proud.

Ah, remember the good old days when the media ran stories asking if President Trump is afraid of stairs?

CNN national reporter, Jeanne Moos explained that she had become “slightly obsessed with watching President Trump watch his step” after hearing a rumor that he has a phobia of stairs and ramps.

But wait! @CNN told me that Trump was the one who was afraid of stairs. @cnn wouldn’t lie to me. Or would they!?! pic.twitter.com/vsNPGBENLi

Ms. Moos, we anxiously look forward to your hard-hitting report on Hillary actually being afraid of stairs. Now that we know she can’t navigate her way down stone steps without sliding down them like a graceless ice skater.