The idea is simple: since we incur costs from Mexican illegal immigration to Mexico’s benefit (as their illegals send back billions in remittances every year), it would make sense to tax Mexico for the illegal immigrants they send us. Studies put the cost of illegal immigration to the American taxpayer at $116 billion a year in direct benefits paid out (mainly due to the costs of educating the children of illegals), and another $30 billion in lost tax revenue.

Meanwhile, those same illegals send a ton of money home to Mexico each year. Over $9 billion USD were sent back to Mexico in just the second quarter of this year. 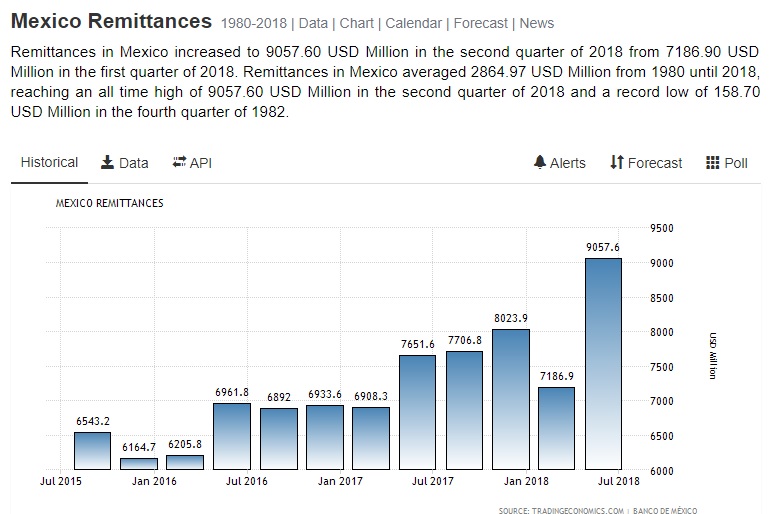 Biggs’ proposed tax would come to $2,000 per illegal, which, according to the Washington Examiner, “With up some 400,000 illegal immigrants being apprehended at the border yearly, could raise $800 million a year.” Biggs’ legislative proposal is called the Fund and Complete the Border Wall Act, and in addition to the $2,000 tax, also calls for:

Thus far, only roughly $5 billion has been included in the 2019 federal budget to help fund the border wall, which will cost an estimated $20-25 billion. This proposal would raise an extra $800 million of that funding each year (that we wouldn’t be paying for), an unspecified amount from taxing remittances. According to one estimate, a 2% tax on all remittances would generate an extra $2.8 billion a year (based on 2016 figures).

There’s certainly no case against this – the only difficulty will come in enforcing the tax. Call me crazy, but I can’t imagine Mexico will be willing to pay these fines without a fight.

Meanwhile, Democrats don’t want to protect the border at all – and we know it’s all politics given that their pro-illegal hysteria is a recent phenomenon. No shortage of top Democrats voted for the Secure Fence Act of 2006, including Barack Obama, Diane Feinstein, Joe Biden, Hillary Clinton, and Chuck Schumer. That Act authorized the construction of 700 miles of fencing along the border.

Go back to the Clinton years, and Bill sounded almost identical to Trump on illegal immigration. Just hear for yourself below:

Clinton said that to a bipartisan round of applause – and the data does suggest that his statements reflected a position held by both Republicans and the Democrats. The majority of Democrats in the 1990s agreed that illegal immigration is harmful to the economy, while only 12 percent agree today.

It’s a reminder of just how destructive partisan politics can be. These Democrat politicians know very well the consequences of illegal immigration, yet refuse to do anything about it solely because they don’t like Donald Trump.