Here’s How the Government Is Ending Gun Rights

For millions of Americans who have done nothing wrong, the Second Amendment might as well be repealed.

The Constitution says that the right to keep and bear arms “shall not be infringed,” but due to technicalities the government created, bureaucrats have given themselves a backdoor to implement gun control.

According to Unbiased America,

As people protest for stricter gun control laws in the wake of the Florida school shooting by a mentally disturbed young man, many people don’t realize that there already are bans in effect for millions of people, including those with mental problems.

The Gun Control Act prohibits purchase of a firearm by anyone who:

Although these categories are clearly justified, the problem is that the government can manipulate the definitions of each category to include more and more people if they wanted to. In that way, a sort of back door firearms ban could be put in place.

Just take a look at the number of those prevented from purchasing firearms over the years – and note the massive acceleration under the Obama Administration. 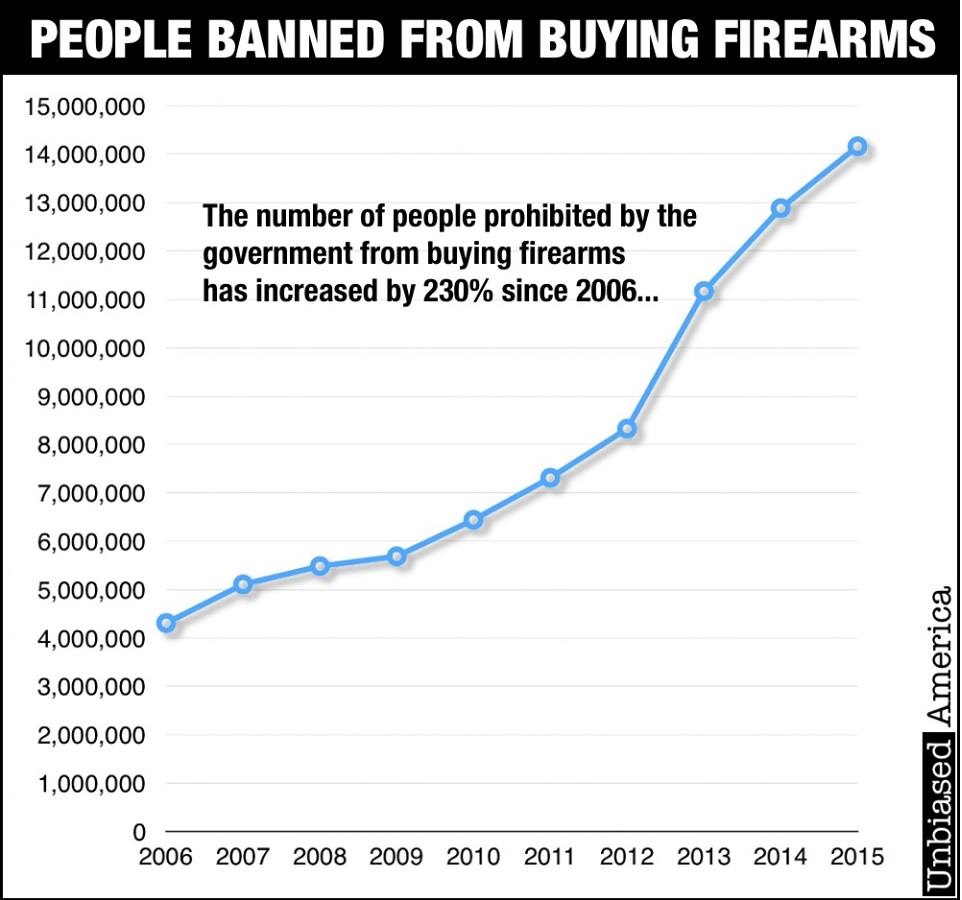 Let’s start by looking at the explosion in those deemed “mentally unfit” to purchase a firearm. Between 2006 and 2015, the restriction expanded from 299,000 people to 4,250,388 people, or a 1,300 percent increase. Obviously we do not believe those who are “mentally unfit” should posses firearms, our concern is that liberals can arbitrarily define “mentally unfit” to be whatever they want. There’s no shortage of headlines claiming that Trump repealed a law that was designed to keep guns out of the hands of the mentally ill, when, in reality, the law would’ve prevented some Social Security recipients who aren’t good with money from owning firearms.

If they could frame such a bizarre gun control measure as “keeping guns out of the hands of the mentally ill,” what wouldn’t they be able to spin? Consider this: 1 in 6 Americans takes some kind of anti-depressant, and over 1 in 4 Americans have received some form of mental health treatment within the past two years.

Should 70 million Americans be prevented from purchasing firearms? Liberals certainly could justify it if they wanted to.

Meanwhile, between 2006 and 2015, the number of people prohibited from purchasing firearms due to the National Instant Criminal Background Check System has increased by 229%, while the population grew by only 6 percent.

The figures are as follows:

What explains the sudden increase? There wasn’t some crime wave that would explain why the number of Americans who’d fail background checks surged.

Are you worried the government will take more action to confiscate your guns? Tell us what you think below and share this story over Facebook now!

Joy Behar Explodes On Meghan McCain: ‘I Am Offended By Republicans!’