While the left is busy pointing fingers at the NRA for every school shooting in America, there’s one very real correlation that is impossible to overlook – Our children’s schools have become easy targets ever since the implementation of the Gun-Free School Zones Act.

That legislation was introduced by former Vice President Joe Biden and signed into law in 1990, and has turned public schools into soft targets for deranged murderers.

The law applies to public, private, and parochial elementary schools and high schools, and to non-private property within 1000 feet of them.

As is typical with liberal policies, the intent sounds terrific, but the implementation doesn’t work in the real world. A Los Angeles Times timeline of mass killings from 1984 to 2017 reveals a vast majority of school shootings followed enactment of the Gun-Free School Zones Act.

That law is what is killing our children – not the NRA. 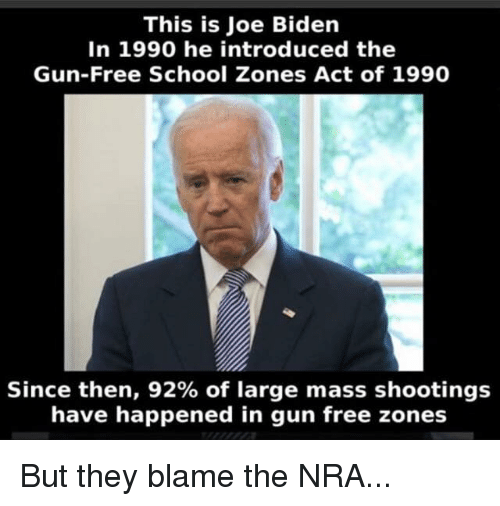 The choice was as clear in 1990 as it is today, either we protect our kids by providing armed resource officers or well-trained and armed teachers on school grounds, or we leave them as sitting ducks for the next shooter who knows full well that return fire isn’t going to stop them before they’ve taken several lives.

We need to “look at the possibility of giving concealed guns to gun-adept teachers with military or special training experience – only the best,” the President tweeted.

I never said “give teachers guns” like was stated on Fake News @CNN & @NBC. What I said was to look at the possibility of giving “concealed guns to gun adept teachers with military or special training experience – only the best. 20% of teachers, a lot, would now be able to

Biden’s gun-free school zones are a “magnet for bad people,” he added.

….immediately fire back if a savage sicko came to a school with bad intentions. Highly trained teachers would also serve as a deterrent to the cowards that do this. Far more assets at much less cost than guards. A “gun free” school is a magnet for bad people. ATTACKS WOULD END!

Patrick Neville, a Republican lawmaker and survivor of the Columbine shooting in 1999, said: “Time and time again we point to the one common theme with mass shootings, they occur in gun-free zones.”

Is it time the American media started pointing their lying little fingers at Biden’s Gun-Free School Zones Act instead of at the NRA?

Do you think making schools ‘gun-free zones’ is creating soft targets for killers? Share your thoughts below!