In an interview with the Hollywood Reporter, Ryan alleged that attacks on the ‘fake news’ industry have led her to need the services of a bodyguard, and because of the White House’s rhetoric, Press Secretary Sarah Sanders should have to foot the bill.

“They’ve put a target on my head … I’ve had death threats. I’ve had craziness,” Ryan said, seemingly unaware of the violence being stoked by Democrats and people in her own industry. “All I’m going to say for my safety is: I have a team.”

She added, “I think (Sanders) should have to pay for it, especially if she’s stirring it up with her boss.”

Ever the warrior, eh April?

An odd complaint, coming from a reporter who once said she was willing to engage Sanders in a “street” fight. 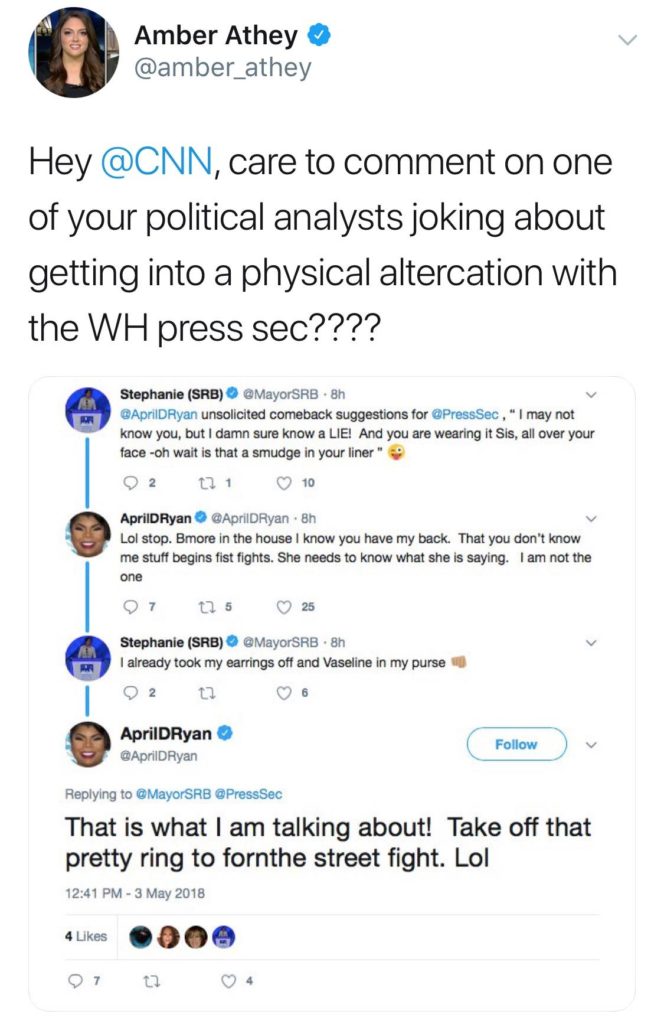 Ryan has repeatedly suggested her life is on the line as a White House reporter, and that the administration is responsible for the frightening state of affairs for media personalities.

In April, she claimed that she had received death threats after asking press secretary Sarah Sanders if President Trump has considered resigning.

“No,” Sanders immediately shot back, “and I think that’s an absolutely ridiculous question.”

The Washington Post reported that the exchange “earned Ryan the usual hate mail, doubled her Twitter following, and even elicited a supportive call from a Republican former press secretary.”

They added, “she also got death threats that required consultation with the FBI and police agencies.”

Forgive us if we look at Ryan’s claims with a slight bit of skepticism. She recently made the ridiculous claim that colleague Jim Acosta’s “life … was in jeopardy” during a Trump rally in Florida, though it was later revealed that he was taking selfies with Trump supporters.

Hey @Acosta is this the “life threatening” situation that you have been describing at the Trump rally?

Why are you peddling this fake hate against @realDonaldTrump and his base? pic.twitter.com/h0Slx7z2V4

Ryan and Sanders have long had verbal spats in their opposing roles in the White House press room, though few would suggest the latter is stirring up violence against the former. It’s more of a simple relationship – Ryan tries to spread lies and misinformation, and Sanders tries to correct her.

Sometimes the banter is playful – Ryan accused Sanders of not being able to bake a pie, Sanders responded by baking her a pie, for example.

Other times, Ryan gets obliterated.

The CNN reporter questioned White House criticism of Democrats after Trump’s State of the Union speech when they acted incredibly un-American, and Sanders promptly turned that around in a hurry.

“What is so un-American about this, this year, after this has been going on for all of these years?” April asked of Sarah.

In her latest interview, Ryan said the press secretary “should be ashamed of herself going out there, saying some of the things that she’s said.”

She’s doesn’t have to try anything, April. Your work speaks for itself.